The drama The Price of the American Dream covers the trials and tribulations of a family struggling to realize their greatest hopes. Very soon the mother and father will become official American citizens after living in the United States for three decades. Their children are each struggling with the harsh realities of life. Their straight-A son may not get the money to go to college, while another son is sliding into a life of crime. Their daughter considers marrying outside her race in order to give her children a chance at a better life. Soon the possibility of a financial windfall presents itself after someone in the family writes a book.

When the Power is Bastard A Film by Mario Ramírez Reyes A young girl just graduated from the academy, tries… 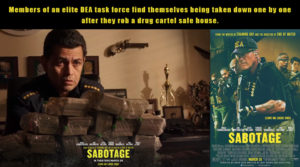 SABOTAGE A Film by David Ayer The elite DEA task force is fighting the world’s deadliest drug cartels. Specializing in…