A Film by David Ayer

The elite DEA task force is fighting the world’s deadliest drug cartels. Specializing in complex mobile operations, the team makes a tactical raid on the cartel’s safe house. What looks like a typical raid actually turns out to be a thoughtful process of stealing money from an apartment that the DEA squad had planned in advance. After hiding millions of stolen money, the team believes that their secret is safe, but someone starts killing team members one by one. 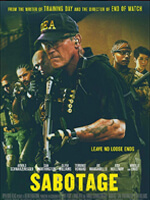 Official site of Sabotage The Movie

Action film starring Arnold Schwarzenegger (Terminator , ” Mercenaries 2″ ) and directed by David Ayer ( ‘ End of Watch’, ‘ Street Kings ‘ ) and written by the writer of ‘ The Jungle : A good day to die ‘ Skip Woods , is based on the novel by Agatha Christie, ” Ten Little Indians ” , and also has the partition Sam Worthington ( ‘ Avatar ‘,’ Crash of the Titans ‘ ), Joe Manganiello ( ” Magic Mike” ) , Terrence Howard (“Hustle & Flow”), Josh Holloway ( “Lost” ) Olivia Williams ( ‘ the Sixth Sense ‘ ) and Mario Ramirez ( “The True Story of Che Guevara ” , “The Price of the American Dream ” ) , playing the commander of Ciudad Juárez.

To see more details of this movie visit IMDB